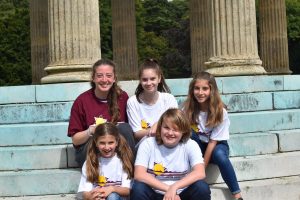 York Liberal Jewish Community were delighted to be able to subsidise the two week camp, thanks to the generous support of the NLPS Trust and the estate of Leon Brittan, the former MP for Richmond in North Yorkshire.

“Kadimah 5777 was a memorable experience that Phoebe and I thoroughly enjoyed.

“Throughout the two weeks we endured many fun activities like whole camp capture the flag (which involved lots of powder paint and shaving foam,) chavurach (a big cluedo game), the wide game, swimming, art, drama, ma’mada’s, lots of kef sessions, the day trip and many more.

“LJY is also a great opportunity to make friends for life in your age group. There are people from all over the country and even different countries. The camp is split into five age categories

“We would definitely recommend it to others as it was so much fun we will definitely go again. Also if children are feeling home sick there are two telephone lines to call home. We really hope to see you at kadimah 5778.”

“It was a great privilege to be able to go to this year’s Kadimah, to learn more about Liberal Judaism and to think about some social issues of today. It was also really good to meet and make friends with Jewish people of a similar age to me. There aren’t many of us at our shul. I am please to say that I am keeping in touch with some of the people I met at camp this year and last year.
“Each year of Kadimah has a different theme; this year’s was Reclaiming. Every day was host to many different fun and educational sessions, many about this theme. I especially enjoyed learning about the connotations of Zionism today and how it’s seen in the media. It’s not only the sessions that are fun, but the people who run them are supportive, fun and clearly very educated about the topics they teach.
“I would highly reccomend this event to anyone who is willing to learn more about Judaism while also being very silly and making good friends.
“Thank you for the funding that allowed be to get to Kadimah this year.”
On July 31, 2017   /   Events, News